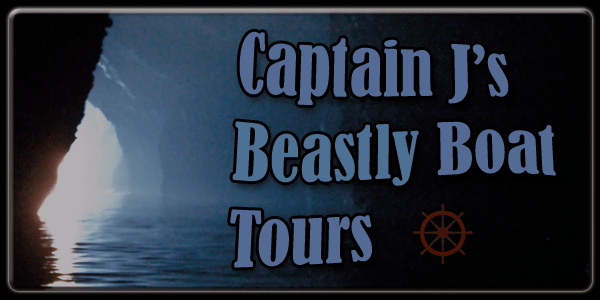 Captain J's Beastly Boat Tours
Step aboard with Captain J and his crew as they take you behind your dreams and nightmares to show you why you are afraid of the dark deep.

Guests are guided onto large boats and seated in rows.  Seatbelts are attached and locked into place.  Once the "First mate" checks that everyone has been secured, the Captain joins the ship and off they go out into the lagoon and over to "The Island".

Captain: Hello landlubbers my name is Captain "?" and I will be your guide through the world of nightmare and fantasy today as we see a brief history of what scares us and why.  Captain J was an amazing fisherman and loved the sea but had a terrible accident and ... well.. let's just say he "saw things" out there that frightened him so much vowed to never set fin on the ocean again.  Having no clue what else he could do, he bought a little island here eat Deadlands and made it his home.  For a little extra income he rents out the top of the island for parties and events like the one tonight, but underneath he started collecting "things" had the brilliant idea of setting up museum of the stuff that scared him the most.  Not long after he opened the doors so folks like you could experience his fears as well.

The boat enters a simulated whirlpool and is dragged down and back into a cave behind the island.

The boat spins and drops and falls down the water shoot into a pitch black cave.  Once settled the boat comes around a bent and the cave is lit by torch lights showing a series of poorly built animatronic characters enacting old movie and scary situations.  They are crudely made and cheap looking but as the tour progresses, they become more lifelike until they start winking at guests and heckling them.

Capt: "Now stay close and buckled up here folks, this seems pretty weird but trust me you will be fine.  Strange things have been happening in this cave lately and I never know what to expect.  For legal reasons I have to tell you we have had a few "fatalities lately".  I probably should have told you that back on the docks aye?  Ah well you are strapped in now and I haven't lost anyone yet."

The characters seem almost real now yelling and interacting with guests.  Creatures above the ships are diving and one grabs the Captain and rips him of the boat up into the dark cave ceiling where guests hear screams and are sprayed with blood (water).

The boat picks up speed and "strapped in" guests hold on as their boats and are sent on a psychedelic high-speed trip (see flume ride style up and over twists and turns and "shot" out of a hole in the middle of the lagoon and returned to the Docks.

Seat belt mechanisms are released, guests depart and are ushered out of their boats.

Merchandise for the Captain J's Beastly Boat Tours and The Island  coming soon.

Remember kiddies... In the event of an Emergency your seatmates' corpse may be used as a flotation device.