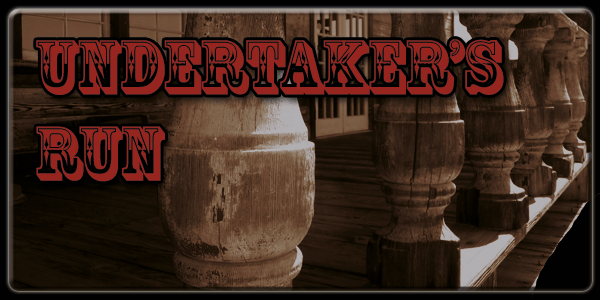 Settle into your “grave-cart” and race your fellow stiffs to the finish line. Will you be left behind to rot or can you outrun death in the Undertaker’s Run?

Thought you could get away huh?  Sooner or later, the Undertaker always gets his measurements. Settle into your “grave-cart” and see if you can beat your fellow stiffs to the finish line.  Will you be left behind to rot or can you outrun death in the Undertaker’s Run?

Guests take a “grave-cart” for a randomly generated winner race through old-east scenes of death and misery.

Guests walk through queue running under the race area, themed as an old-west ghost town. They enter the Undertaker’s Shack where they line up and are “measured” in the queue by cast members dressed as ramshackle undertakers.  They are then loaded into their cars shaped like various gravestones and await instructions.

On the screen to the sides an Undertaker (dressed similar to the CM’s) appears.

Undertaker: Welcome to the Undertaker’s Run.  Business has been quite good lately but this town has become quite boring.  Since you are all destined to die here anyway I thought we might have some fun.  The first of you to reach the end of my run… lives to ride another day.  The rest of you… well you have been measured and an appropriate box will be awaiting you at the finish.  Good luck, say your prayers and see you soon.  Most of you anyway.

The race begins and cars pass each other randomly as they race around the track, viewing the following scenarios

A winner is randomly generated at the end.

The Undertaker addresses the cars.

Winning Car: Well it seems you get a free pass this time… but I am certain I will be seeing you soon.

Losing Car: “Better Luck Next Time… Oh Wait… there won’t be a next time….  Muahaha